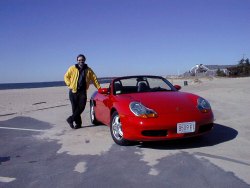 Before FYItag, I worked at Comverse in the Comverse Media Server group. (Comverse was later Xura, and now Mavenir. I was with Comverse ever since they bought InTouch Systems, a small startup in Cambridge, MA. When I joined InTouch in Feb 1997, there were only six employees. While at Comverse, I worked on Tel@GO, a voice-activated telephone assistant; the Comverse Media Server, a high performance, standards-compliant telco-grade VoiceXML media server; the Network Address Book, Java-based SyncML server; and IVE, a graphical programming environment built in Java for developing VoiceXML applications.

Before InTouch, I worked at Bolt Beranek & Newman for sixteen years. I had a great time there and still have friends at BBN. In the time that I was there, I worked on many things. My wife Heidi also works at BBN, managing development in the QoS Services and VPN groups.

BBN was purchased by GTE, GTE merged with Bell Atlantic to form Verizon. Verizon spun off the former BBN Planet (a.k.a GTE Internetworking) to form Genuity and kept the former BBN S&T as BBN Technologies. Later, BBN was repurchased from Verizon by a private group of investors and is now, once again, an independent company.

I've been on the "Internet" since about 1979, my first address being JJD@ MIT -MC and my second being JJD@BBN-UNIX. Later, for many years I was jjd at bbn.com.